Snoopy has been associated with NASA since the late 1950s, long before man reached the moon. The creator of the comic strip, Charles Schulz was a fan of the space race and NASA, and frequently used space exploration themes in his comic strips. In this way he began a relationship with NASA, to which Schulz gave permission to use his characters without benefit to him, provided that he was the one who created all the illustrations of Snoopy that NASA required.

There is a lot of relationship between Snoopy and NASA since then. Apollo 10 was launched in 1969, as a dress rehearsal for Apollo 11 that was to land on the moon. They carried a lunar module that the crew nicknamed Snoopy, and a command module that they called Charlie Brown.

Snoopy has always been related to safety at NASA, and that is why in 1968 NASA created the Silver Snoopy, an award that is given to those who have contributed significantly to the manned space flight program, to guarantee the safety of the flight and the mission success. These awards are given to employees and contractors. The award consists of a silver Snoopy lapel pin. All the pins that are given as awards have been in space. 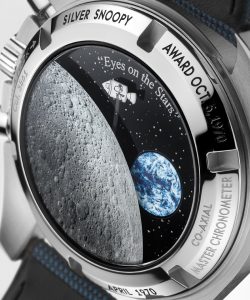 1970 Apollo 13 mission had serious problems and lost much of the instrumentation. The astronauts used an Omega Speedmaster to accurately measure the ignition timing of the engines to perform a complicated maneuver that brought them home.

On October 5, 1970, Omega was awarded a Silver Snoopy, in recognition of his work in the rescue mission.

50 years have passed since that October 5, 1970. And the people of Omega have thought that this was the indicated date to release their new Omega Speedmaster Silver Snoopy 50th anniversary watch.

It is the 3rd watch made by Omega with Snoopy as the protagonist. The first was released in 2003 and the second in 2015. Both came out in limited editions, with 5,411 and 1,970 pieces respectively. Obviously it was difficult to get hold of a unit and that is why they are watches listed on the second-hand market, widely exceeding their P.V.P, especially the 2nd version of 2015.

This time Omega has decided that this 50th anniversary version of the Silver Snoopy award is not a limited edition, so, stock problems aside, anyone who wants and is not in a hurry, can get one from November in exchange for 9,600 €. Of course, it will have to be at an official dealer, since the watch will not be sold online. 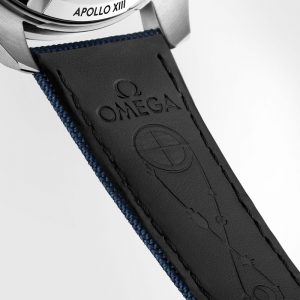 We already know the story behind this watch, but how is this Omega Speedmaster Silver Snoopy? Well, it is a Speedmaster with a 42mm stainless steel case with a white dial and 3 blue counters. It has a blue ceramic bezel with the tachymeter notation, and with Snoopy in his spacesuit in the background on one of the counters.

The watch carries the caliber 3861, the latest update to the Moonwatch movement.

The strap incorporates a die from the Apollo 13 trip, with the moment when they had to start the engines blindly, using only the relative position of the earth through the lunar module window and with an Omega Speedmaster to control the time. ignition.

Omega has undoubtedly created one of the most beautiful watches in its history with this Omega Speedmaster Silver Snoopy. An incredible edition full of details, and as always in Omega, with spectacular packaging.