Obtaining and using pieces of meteorites is more frequent than it may seem. Over millions of years many meteorites have struck the earth, and continue to do so. Most are very small pieces, and not all have a composition suitable for use in watchmaking.

Most clocks with meteorite spheres have come from 2 large meteorites that hit the earth millions of years ago: the Gibeonmeteorite, in Namibiaand the Muonionalustameteorite, in Sweden. Both meteorites were large in size and their fragments as they entered the atmosphere spread out over large surface areas, hundreds of kilometers long.

The first fragment of the Gibeon meteorite was discovered in 1836. Since then dozens of fragments weighing between 100 and 500 kg have been found.

The first fragment of the Muonionalusta meteorite was found in 1910. As far as it is known, around 40 fragments have been found to date.

These 2 large meteorites are basically made up of Iron and Nickel. These meteorites have crystallized structures throughout millions and millions of years of cooling in space. These crystals have different resistance to acid or heat, and that is why these characteristic patterns, known as Widmanstätten structures, that these meteorites have arise.

To make the dial, thin layers of the meteorite are cut for treatment. Because the patterns are random, all the dials on these meteorite watches are different. This makes each watch with a meteorite dial not only carrying a tiny trillion-year-old spatial fragment, but also unique, as no two dials are alike.

Clocks made of meteorites 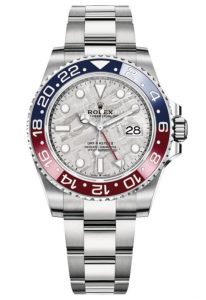 In 2019 they presented the Rolex GMT Master II ‘Meteorite’, the first Rolex model that is not a Daytona or Day Date to have a version with a meteorite dial. The watch is made of white gold, in addition to the meteorite dial, and has an official price of € 38,000.

Despite the fact that since 1950 the Gibeon meteorite fragments have been protected by Namibian laws and cannot be traded, Rolex still has reserves of this meteorite that it acquired previously.

Omega also created its own meteorite dial watch. Given his Speedmaster’s relationship to space missions, it was clear that the watch chosen had to be a SpeedmasterMoonwatch. They created the Gray Side of the moon variant, made of ceramic and 18-karat sedna gold, and a meteorite dial. As in the case of Rolex watches, this Omega also has a dial made from fragments of the Gibeon meteorite from Namibia. This watch has an official price of € 14,700.

Other brands such as Parmigiani Fleurier, Piaget, Zenith, or Cartier have also made watches using different meteorite fragments.