Year 2017. For Lewis Hamilton it promised to be a good year. Nico Rosberg had retired from Formula 1, leaving him ‘alone’ to fight for the title of Formula 1 world champion. From here, and thanks to the superiority of the Mercedes car, 4 more world championships would come, 7 in total. 2017 was the beginning of a good period in the life of Lewis Hamilton … or not?

In 2017 Lewis Hamilton decided to take legal action against the watch company ‘Hamilton Watch Company’, of the Swatch Group, which sells watches under the trade name ‘Hamilton’. The pilot accused the watch company of misappropriating his image.

It also adds that there is no natural right for a person to have their own name registered as a trademark, as this would infringe the rights of third parties.

Lewis Hamilton’s company, 44IP, was attempting to register the Lewis Hamilton ‘trademark for a number of products, such as jewelry, watches and smartwatches.

In this case, the attorneys for Hamilton Watch Company objected, considering that intellectual property rights were infringed.

‘We do not consider it appropriate or necessary to facilitate the market strategies and marketing plans of a competitor, who intends to enter the market with a brand that is practically identical to our client’s well-known previous brands, offering products that are also identical.’

In the end, Lewis Hamilton’s plans are thwarted by losing the legal battle. 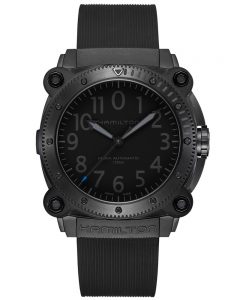 In 1974 the Swatch Group acquired the Hamilton watch company.

Today Hamilton continues to operate and manufacture luxury and high-end watches. In the summer of this year 2020 Hamilton released a special edition due to his collaboration with Christopher Nolan, for his film Tenet. It is a limited edition in 2 finishes that differ slightly, only in the color of the tip of the second hand: red or blue. This makes sense after watching the movie.